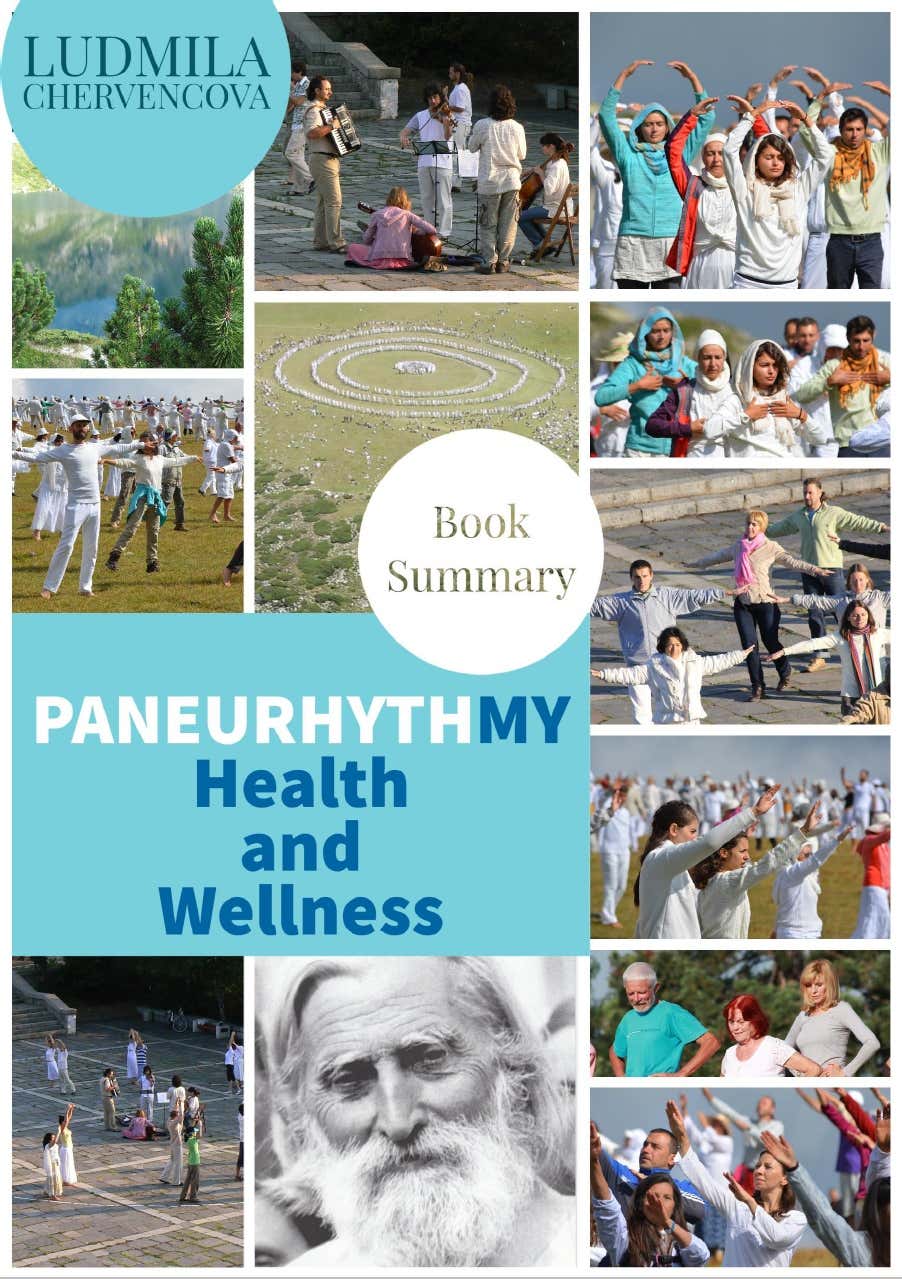 Assoc. prof. Ludmila Chervencova (PT, PhD) is a lecturer in the Department of Physical therapy and rehabilitation in Vassil Levski National Sports Academy in Sofia, Bulgaria. She has a lot of years of experience in the field of physical therapy. She is a Paneurhythmy teacher and a researcher.

Paneurhythmy is a universal physical practice for health of the human body, mind, emotions and spirit. It is impressive in its effectiveness and has a positive impact on one’s physical, psychological and social state. Paneurhythmy appeared and developed as a system of exercises in the cultural environment of an ancient European and Christian country. It is an attractive European psycho-physical and spiritual practice, similar to Уoga in Asia, but originating from the Christian tradition and Western cultural heritage. That's why Paneurhythmy may be called the Yoga of the West. Paneurhythmy attracts the attention of people from all over the world who study it in courses and practice it. For about 80 years from its appearance it has already been spread in countries on the 5 continents. It has the amazing potential to make life more meaningful, joyful and beautiful uniting people from different races, sexes, ages, nationalities and religions. The monograph which Summary you are reading now is the first in its kind theoretical and empiric research of Paneurhythmy that traces the mechanisms of its impact in details and gives the results of the newest studies of that unique Bulgarian model of physical activity.

SCIENTIFIC RESEARCHES ON THE EFFECT OF PANEURHYTHMY

The Paneurhythmy is a Bulgarian system of rhythmic musical exercises which was created by Petar Danov (Beinsa Duno) in the period between 1927 and 1942. He asserted that the essential purpose and profit of Paneurtythmy is to maintain and improve health and working capacity, to serve for working on perfection on your own, to help expressing the creative abilities and to achieve har­mony in the interrelationship between people, on the one hand, and between people and nature, on the other.

The Paneurhythmy is a unique combination of music, move­ments, speech, philosophy and interaction with nature. That's the reason why it has much in common with music-therapy, kinesitherapy, psychotherapy, art-therapy, peda­gogy, philosophy, etc.

During the last couple of years the Paneurhythmy has been stud­ied by specialists from different scientific fields. Their studies unveil interesting direc­tions in respect to the effect of Paneurhythmy, this unique Bulgarian system of exercises.

Research of Ludmila Chervencova (Physical Therapist, PhD) has focused on the changes of the physical and psychological state of adults who have learned to practice Paneurhythmy. The following significant positive changes have been measured after 5-6 months of Paneurhythmy training (these were not observed in the control group):

The Paneurhythmy is a Bulgarian system of rhythmic musical physical exercises. The Paneurhythmy has been present in the Bulgarian cultural life for more than 70 years. Its aim is to have a wholesome effect on the psychophysical condition and to improve the quality of life. Since it is accessible to everybody and very enjoyable to practise the number of people in Bulgaria who exercise Paneurhythmy has rapidly increased during the last years.

The Paneurhythmy is an unique combination of music, move­ments, thought, speech, philosophy and interaction with nature. That's the reason why it has much in common with music therapy, kinesitherapy, positive psychotherapy, art-therapy, peda­gogy, philosophy, etc. During the last couple of years the Paneurhythmy has been stud­ied by specialists from different scientific fields. Their studies unveil interesting direc­tions in respect to the effect of Paneurhythmy, this unique Bulgarian system of exercises.

II. Characteristic features of the exercises of Paneurhythmy and their positive effect:

III. Characteristics of Paneurhythmy as a complex set of exercise

2.       Intensity: The exercises have aerobic features and, for players in good condition of the body, the intensity is low. The physical exertion is constant; therefore it is possible and easy to estimate the strain bearability in the cases of players who have health problems.

4.       Initial position: The initial and constant position of the body during all exercises is the standing position.

-                      they involve almost all the muscles and joints in the human body and keep balanced the number of upper extremities’ movements while improving the locomotion.

6.       By physiological characteristics, the exercises are:

The Paneurhythmy is appropriate for a wide range of age groups. It is suitable not only for people of middle age but also for children because it looks like game and can easily involve them on the emotional level due to the group performance and the musical accompaniment. It is also fit for elderly people because it meets the principal methodical requirements of kinesitherapy and geriatrics.

Practising Paneurhythmy is within the financial capacity of everyone: it is extremely economical and inexpensive since it does not require any special out fit, equipment or terrain.

The Paneurhythmy does not discriminate against sex, age, state of health, state of readiness as most sports and fitness systems do. To the contrary, it integrates these differences and thus unites them.

IV. Ways of influence of the Paneurhythmic exercises :

3)            The influence of the song texts: formation of positive attitudes and mental patterns for effective coping with life.

4)            The Collective nature of the exercises masters the social skills – the Paneurhythmy improves people’s abilities for communication through developing their tolerance, patience and ability to work in a group. It also gives them the opportunity to expand the range of their social contacts.

5)            According to Beinsa Douno – the Author of Paneurhythmy – it has a positive effect because of the special combination between music and movements (Douno, 1938, 2004) – by achieving a resonance between the separate components that constitute the Paneurhythmy, it easily intensifies the overall impression and improves significantly the whole state of the players.

6)            Introduction of rhythm to the physiological processes through the rhythmic music of the exercises and by the daily practice at one and the same hour.

7)            The effects of the exercises upon the locomotory and the cardiovascular systems: Paneurhythmy sets in motion the joints, stimulates the tonicity of the muscles, and improves the control over the muscles, the posture and the gait, as well as the circulation of the blood, etc.

9)            Total impact of the components of Paneurhythmy on the nervous system: mental relaxation, improvement of concentration, expansion of the abilities for focusing, distributing and shifting of the attention; development of the cognitive processes such as perception, memory, thought, etc.

V. Survey data about the effects of Paneurhythmy over people at a mature age

(Almost all of the studies concern the effects of trainings in Paneurhythmy for beginners).

Increased general self-efficacy, i.e. the subjective belief that one is capable of coping with problems and difficulties (Zsheliaskova-Koynova, Chervenkova, 2009);

VI. Survey data about the effects of Paneurhythmy over children

(All the undermentioned studies show the effects which Paneurhythmy has over children during their beginner trainings. Almost all of the listed results are obtained during the implementation of the programme “Healthy by Exercising in Nature”).

Developing characteristics of attention – sustainability and redirection (Michalkova and colleagues, 2001);

Increasing the capacity of short-term auditory memory (Michalkova and colleagues, 2001);

Improving the self-confidence, the activity and the mood of the children who are trained in Paneurhythmy (Boyadjieva, Yankova, Yacevich, 2007);

Developing the sustainability and concentration of attention (Matanova, Yankova, 2007);

Developing the perception abilities and the defining of the body scheme - verbal and non-verbal abilities (Matanova, Yankova, 2007);

-          building up friendly relationships, mutual support and strong emotional connection on the grounds of free willingness and spontaneous participation in the co-work.

Prevention and treatment of minor spinal deformities (Chervenkova and colleagues, 2003);

VII.          Recommendations for practicing Paneurhythmy with regard to the theory of kinesitherapy.

In accordance with the current methodical requirements of kinesitherapy, the complex of Paneurhythmic exercises is suitable for being part of a complete kinesitherapeutic program for prevention and treatment of:

-          arthritides (in remission or such to the upper extremities in a more acute stage);

-          diabetes (in the cases of compensatory state, as part of the remedial gymnastic program)

-          Illnesses and conditions related to moderate disorders in the balance and in the movement coordination.

According to the definition of WHO (World Health Organization), health is the state of complete physical, mental and social well-being. The aforementioned results of scientific studies give evidence that the activities related to Paneurhythmy contribute to the improvement of the physical, mental and social well-being. In this respect, the Paneurhythmy is an accessible, pleasant and effective physical activity which efficiently supports the maintenance and improvement of health.

“You should come to know the scientific side of Paneurhythmy. Nature likes to reach great achievements with the smallest efforts. In Paneurhythmy, the forces of mind, heart and will are made to work in harmony.”

1.       Alexandrova, D., Vulcheva, I., Kangaldjiev, I. (2003).The application of Paneurhythmy in the diabetes treatment. Included in: The Second scientific conference for Paneurhythmy – reports, NSA “Vassil Levski” and Paneurhythmy Association,Sofia, p.114-121 (In Bulgarian).

2.       Ancheva, D.(2003). A quantitative analysis of the text of Paneurhythmy by the means of content analysis. Included in: The Second scientific conference for Paneurhythmy – reports, NSA “Vassil Levski” and Paneurhythmy Association, Sofia, p.52-75 (In Bulgarian).

4.       Boyadjieva, N., Yankova, A., Yacevich, V. (2007). Effects of Paneurhythmy on the psycho-emotional state and the state of anxiety among pupils from the first to the sixth grade. Included in: The Paneurhythmy as a system for harmonious development of the people and the society. NSA “Vassil Levski” andPaneurhythmy Research and Application Institute, Sofia, p.29-42 (In Bulgarian).

5.       Boyadjieva , N., Yankova, A., Yacevich, V. (2007). Effects of Paneurhythmy on the self-esteem and the personality development during the middle and the late childhood. Included in: The Paneurhythmy as a system for harmonious development of the people and the society. Paneurhythmy Research and Application Institute, Sofia , p.18-28 (In Bulgarian).

10.   Matanova, V., Yankova (2007). Effects of Paneurhythmy trainings on the emotional, cognitive and social functioning during the pre-school age. Included in: The Paneurhythmy as a system for harmonious development of the people and the society. Paneurhythmy Research and Application Institute, Sofia, p.43-49 (In Bulgarian).

12.   Milcheva, N., Koleva, I. (2003).Study on the effects of Paneurhythmy over the working capacity and the thinking. Included in: The Second scientific conference for Paneurhythmy – reports, NSA “Vassil Levski” and Paneurhythmy Association, Sofia, p.121-127 (In Bulgarian).

14.   Chervenkova, L. (2004). A survey about the psychophysical changes which occur by practicing Paneurhythmy. Included in: Sport, society, education, volume 9, Sofia, p.166-178 (In Bulgarian).

15.   Chervenkova, L. Improvement of the state of equilibrium under the influence of Paneurhythmy training. XV scientific conference ”Personality. Motivation. Sport”, 29.05.2009, Sofia, (In Bulgarian)

This text is from:

DYNAMIC STABILITY IN HEALTHY
ADULTS WHO HAVE LEARNED TO PRACTICE PANEURHYTHMY

Introduction: There is a little information about the amount of change of the dynamic stability in physically active Bulgarian younger adults undergoing recreational physical activity.
The aim of the present study is to compare dynamic balance in physically active adults (dealing with Paneurhythmy or other types of physical activity).
Methods:
Design: a cross-sectional study. Sample of convenience (n =116). Study subjects were typical people (20-60 years old), divided in two groups: experimental (n= 66) participated in a course of Paneurhythmy (EG) and control group (CG, n= 50). All they were divided in youngest (20-39 years) and middle-aged groups (40-60 years) and executed Figure-of-8 Walk Test and four square step test (FSST).
Results: The T Test revealed for Figure-of-8 Walk Test significant difference (p<0,01) between younger of EG and CG (p<0.01) and between younger and middle-aged of EG (p<0.05) There is no significant difference between groups for FSST.
Discussion and Conclusions:
A Paneurhythmy group performed significantly better than control group for more challenging dynamic balance task. Paneurhythmy is unique Bulgarian system appropriate for younger adults like recreational physical activity with a view to proactive approach to influence age-related changes in dynamic balance.